Gaslight (verb):  to manipulate someone in to questioning their own sanity.

It seems like almost every day I meet someone who has been told that their dizziness, nausea, headaches and other symptoms are psychological.  Sometimes it’s chalked up to depression or anxiety (despite solid research showing that eye movement problems are not caused by depression or anxiety).  Sometimes it’s chalked up to being just vestibular in nature.  The problem is that the testing of the health of the eye, visual acuity, and very basic eye movement testing shows normal signs.  Essentially it comes down to a problem of education.  Our medical and health profession schools do not teach the most up to date understanding of visual function or how visual function problems can lead to symptoms we normally associate with vestibular conditions.  One of the biggest problems is that professionals assume they know all there is to know.  If they were not taught it, or cannot find the problem. It must not exist.  We default to telling the person that it’s all in their head.

Let’s take a minute to walk through one type of case I see much too often.  His name is DJ (changed).

DJ has had a concussion or TBI (traumatic brain injury) about 2 years ago.  Since then he has been through physiotherapy, vestibular rehabilitation, cognitive therapy and more.  A few of his symptoms have improved, but he still has trouble with computers, screens, lights, reading, places like Walmart or Costco, and is struggling in his return to work.  He gets dizzy, nauseous, has headaches almost daily, and is exhausted trying to return to work.   He has plateaued in his recovery He has been told his vision is fine, and that the dizziness he still gets must be vestibular in nature.  Several doctors and other people have implied that his symptoms may now just be because of anxiety.  That he is making it up.  Malingering is what they call it. 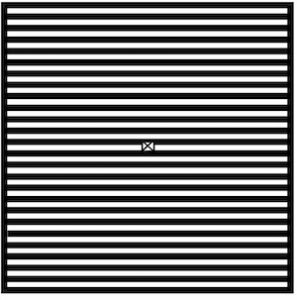 Before even examining anything visual, the history demonstrates that visual stimulus will provoke symptoms.  That’s one reason I’m a fan of the pattern glare test.  This gives nothing other than visual stimulus.  If pattern glare provokes symptoms, we know that there are problems with how the brain is processing vision.  This means that if vision is being used during other testing, it has now interfered with the other tests.

Back to DJ. During testing, it becomes obvious that anytime he has to track a moving object, move his eyes closer together or try to read it provokes symptoms.  The computer tracking of his reading shows that the two eyes are not working together. Almost always, the same day we can use glasses that change the perception of depth and space to gain some immediate improvements in either balance, dizziness, or the response to the pattern glare (implicated to show visual involvement in headaches and migraines).  See below for an example.  The lenses change the interaction of the visual and vestibular systems and can improve how motor coordination happens.  Remember, coordination requires coordinates.

To sum it up, DJ has a history that demonstrates that visual stimulus provokes symptoms since the accident.  He has both objective and subjective measurements during an examination which demonstrate changes to how he processes vision positively impact his performance and symptoms.  Treatment is actually quite simple in prescribing lenses that improve function, and using proper vision therapy so his brain can re-learn how to control his eyes and process/integrate his vision.  It is actually a very simple way forward, with very high success rates when done properly.

The reality is that I see patients like DJ all the time.  From 1 year of struggling to 8 years of struggling.   The reasons they are left struggling include a lack of public awareness and a lack of professional understanding.

It crushes me to see people’s lives impacted in such a way, for so long, when the conditions causing their struggle are treatable.   On top of it, they are often told that anxiety or psychological problems are causing their dizziness, headaches, vertigo, and sensory overload.  I’ve had family members affected by this and have dedicated my life to preventing others from having the same experience.

As you are reading this text, your brain is controlling how the incoming information is processed, and how your eyes track, coordinate, and focus.  Post Trauma Vision Syndrome refers to deficits in these areas after a concussion, head-injury, whiplash, or mild traumatic brain injury (MTBI).  If you have PTVS and your eyes do not work together efficiently, you will have a hard time sustaining your attention and may even end up with a headache or migraine.  Problems with inaccurate eye tracking may cause you to mix up the information, or feel like you struggle to comprehend it.  It has been common to think about “vision” as just seeing clearly and the physiological health of the eye itself, with almost no attention given to how accurately or efficiently the system works.  The paradigm is now shifting as we understand the importance of the neurological role in eye coordination and information processing, during the last few decades.  With over 50 per cent of the brain involved in the visual function, PTVS is commonly responsible for ongoing symptoms after trauma.

Post Trauma Vision Syndrome is caused by damage to regions of the brain that are involved in various aspects of visual function. This disrupts the stored “programs” for how the visual system functions.  This damage occurs on the axonal level and often escapes detection by medical imaging.  PTVS encompasses more specific diagnoses like egocentric visual midline shift, oculomotor dysfunction, binocular dysfunction and more.

What are the effects of Post Trauma Vision Syndrome?

Post Trauma Vision Syndrome may affect one or more specific areas of visual function, so the effects can be varied.  PTVS can affect one’s ability to read, comprehend, and sustain attention. It can also cause dizziness/vertigo and headaches/migraines.

Reading:  If you were a marathon runner who sustained an injury that disrupted the coordination of your legs, it would be understandable as to why your running was suffering even if you were physically healthy and in great shape.  It would also be understandable as to why you would not be able to run for as long as before.  When PTVS causes problems with eye tracking and how the eyes are working together it will impact a person’s reading abilities and how long they can sustain the process.  If it becomes difficult to control eye coordination, the reading comprehension will also drop.  This challenge is similar to how hard it is to hold a conversation when you are learning to drive a manual transmission, as all your conscious ability is directed towards just trying to do it.  Vision dysfunctions that affect reading can also indirectly affect any other testing involving reading.

Dizziness/balance/vertigo:  Vestibular, proprioceptive (information from muscles and joints), and visual information all need to accurately integrate together.  PTVS causes the visual system to feed “garbage” into this collaboration, which will prevent proper integration often causing the person to plateau with vestibular rehabilitation.  Unfortunately, this has led to accusations of malingering when there was truly an unidentified vision problem preventing the rehabilitation.  Often in an assessment, there are lenses (glasses) that can be put on a person that change their perception of physical space, dramatically improving their balance and symptoms immediately.  It is also possible to mimic some of these problems in someone who has normal visual function by reversing the process.

Headaches/Migraines:  Vision dysfunction after an injury can result in a litany of headaches and migraines often associated with computers, reading, busy visual environments, and other visual stimuli.  Using a high contrast black and white grid and gauging the person’s reaction to it, is a great way to determine whether the visual system is a playing a role in these symptoms. Inefficiencies with how the eyes coordinate will produce situations that make it difficult for a person to sustain attention, which creates a confounding variable for a lot of testing.

PTVS can also cause difficulties with tracking moving objects and make stationary objects appear to move. It can create general fogginess, difficulty concentrating on tasks such as conversation (as the brain is using most of its resources on vision), light sensitivity, and even sensitivity to sound.  It is as though most of the brain’s processing power is caught up in trying to make sense of the visual information, so there is less to allocate to other areas of function.

Similar to vestibular problems after a concussion, PTVS requires rehabilitative efforts centered around re-establishing the areas of affected visual function. Special types of prescription lenses can improve the efficiency of visual function and how an individual processes depth and space.  Treatment time can range from weeks to more than a year, and the neurological changes are permanent.  Treatment for PTVS is commonly coordinated with other professionals. Most eye examinations concentrate on acuity and the physical health of the eye.  It is important that you ask your eye care professional if they can test for Post Trauma Vision Syndrome and the specific areas of visual function commonly affected.